Julie Dawn not only has one of the finest female voices on the circuit today, but also has the most amazing bubbly personality to go with it. With well over 25 years of experience it's not hard to see why she is so highly thought of on the music scene.

Julie Dawn was born in Norwich, Norfolk, in 1967. From an early age Julie had always loved singing and whenever she was asked what she wanted

to do, she would always reply "I want to be a singer"

At the age of just 12 Julie started taking guitar lessons and after mastering the basics she then entered her very first talent competition in a local pub, which she then went onto win.

This then took Julie through to the finals of the "Talk Of East Anglia" held in Norwich in 1982 where she came 3rd.
Julie Dawn In 1982 At The Talk Of The East Finals

This was the start of Julies singing career, with more guitar practice and learning more and more material she started singing around the local pubs, clubs and hotels.

Julie only being 13 unable to drive had to rely on her parents to drive her around to her bookings, this is something that she will always be in debt with her parents for, as they gave her the chance to do something she loved and to this day still loves.

1987 saw a major change in Julie's career and the start of a whole new act as she was joined by her younger sister Linda.

Linda played the bass guitar and with two angelic voices working together they soon created what they became famous for, their 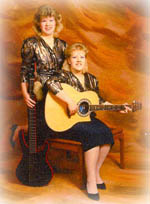 The girls worked hard and soon made quite a name for themselves around the local pub scene. In 1988 they decided to make the move over to the Country Music Circuit.

Linda & Julie Dawn
The girls were given the chance of playing at the Winter Gardens by a local radio station, Radio Broadland where they supported the likes of, Mary Duff, Raymond Froggatt and Mud.

Julie & Linda had their first recording sponsored by local radio presenter Bob Morgan and his wife Joan along with Frank & Jenny Howe who came up with the name "New Dawn" for the girls.

They also got them some prestigious gigs, one of them being at the Wembley Conference Centre at the Best Of British show. 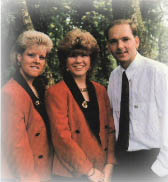 New Dawn Trio
In 1991 the sisters were joined by Kevin Tonks a fine singer, guitar and banjo player and they became known as the "New Dawn Trio". Kevin joining the girls enabled them to play at a number of country music clubs, theatres and festivals all over the country.

They picked up a number of different country music awards, one of which being the "Country Music Round Up's Award" for "Best Newcomers", which was a great honour and they were lucky enough to have it presented to them by George Hamilton VI.

New Dawn continued to have many years of success and later on Linda and Kevin got married and Linda decided to leave New Dawn to start a family.

Julie and Kevin decided to carry on New Dawn firstly being joined for a short time by a fantastic guitarist Wayne Golden who now plays with Dominic Kirwin.

Then later on Mickey Bembridge joined them on the keyboards, who used to play Keyboards for Cambells Country.
New Dawn Duo

In 2003 Julie and Kevin returned back to a duo and decided to stay as a duo still keeping the name New Dawn and had a very successful career together.

Julie Dawn
In 2006 Julie and her husband Chris celebrated the birth of their son Jed, which prompted Julie to want to play more locally again and spend more time with her new family.

So in 2008 after 19 fantastic years New Dawn decided to finish so both Julie and Kevin could concentrate on their own solo careers.

So in 2009 Julie is once again back were she begun, doing what she loves best singing and bringing up her young family. 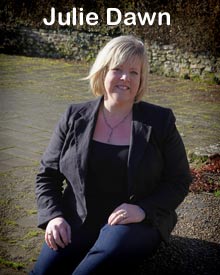